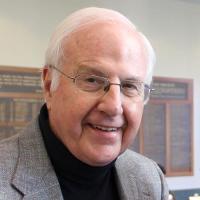 Professor Dowell's principal teaching interest and research activity is in the field of aeroelasticity - which is the study of the dynamic interaction between an aerodynamic flow and an elastic structure, such as aircraft wings in high speed flight, long span bridges and tall buildings responding to wind loadings, or airflow through the mouth and lungs. Dr. Dowell has also done research in acoustics, nonlinear dynamics, structural dynamics, and unsteady aerodynamics.

Professor Dowell's major research accomplishments include the first definitive research monograph on the aeroelasticity of plates and shells, the first derivation and solution of the nonlinear equations of motion for a helicopter rotor blade (the Hodges-Dowell equations), and work with Professor Kenneth Hall and several graduate students and post-doctoral fellows on reducing the dimensions of mathematical models for very complex high-dimensional fluid/structural systems. Professor Dowell teaches undergraduate and graduate courses on dynamics and aeroelasticity.