This section of the website contains video footage from about 20 experimental systems, examined in the nonlinear dynamics lab over the years. The tabs to the right contain Youtube playlists that group the videos. These are a subset of the total number of projects, but they happen to involve behavior at scales that make video viewing suitable.

A recent seminar at NC State Univertsity (2021) can be found here. It actually starts about 5 minutes in.

The link here is to a presentation at the ENOC conference held in Vienna in 2104, that includes a few videos but also describes nonlinear behavior in relatively simple terms. 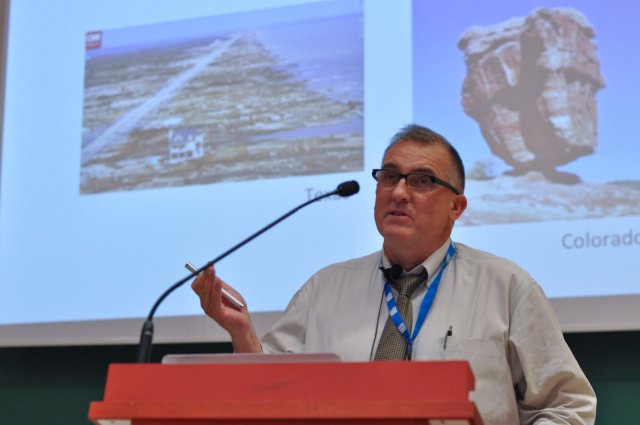 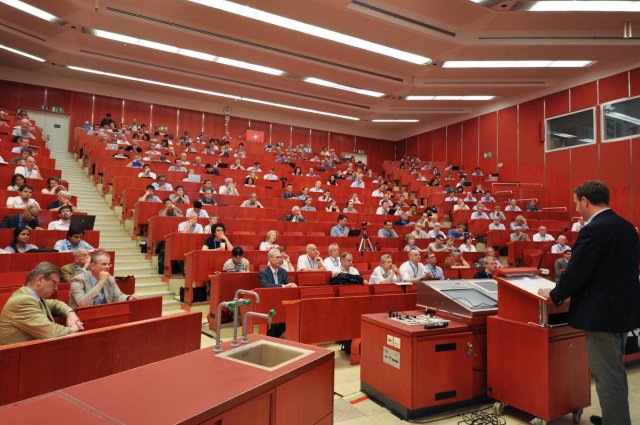 As a starter consider the video below. A small ball (a rubber coated steel ball bearing) rolls on a machined surface. The location of the ball is tracked by a high-speed video camera as it rolls on the surface under the influence of gravity. Under these specific (harmonic) forcing conditions the ball exhibits chaotic behavior. Former PhD students Ben Davis (now an assistant professor at the University of Georgia) and Ted Lyman were part of the team looking at this system.

By clicking on the Duffing Track link to the right, you'll find a group of vidoes that show the behavior of a small 'roller-coaster' that travels (in the vertical plane) along a twin-well track. Under harmonic forcing the cart exhibits various kinds of behavior including chaos. A variation on this theme is the 'escape' track, with a one-soded drop-off. In this case it is interesting to determine under what forcing conditions the cart will spill-out of the local potential energy well. A motivation for this study was the roll motion of a ship leading to capsize. This work was conducted with Jim Gottwald and Earl Dowell. A related version of this system was also studied by former PhD student Mike Todd (now a full professor in the Department of Structural Engineering at UCSD).

A very shallow arch exhibits a snap-through buckling event when loaded laterally. A load cell measures the point force and a laser sensor measures the deflection at a point. This system exhibits various instabilities along relatively nonlinear eqilibrium paths. This work was conducted with former post-doc Scott Harvey (now an assistant professor of Civil Engineering at the University of Oklahoma).

Polycarbonate is an elastic, highly flexible material, and is thus suitable for experiments on high delfected structural configurations. A laser vibrometer can also be used to extract vibration (frequency and mode shape) characteristics. A vaiety of configurations, loadings and boundary conditions can easily be incorporated. This work was largely conducted with former PhD student Sophia Santillan (now an assitant professor of the practice at Duke University) and Ray Plaut, an emeritus professor at Virginia Tech.

Rigid link models are low-dimensional and relatively easy-to-measure mechanical systems consisting of an arrangement of bars and springs. The system illustrated in the video section can exhibit a variety of interesting dynamic behavior. Part of this study was to focus attention on co-existing attractors, more detials of which can be found in the research section of this website. This work was conducted in conjunction with former MS student Josh Waite and former PhD student Richard Wiebe, now an assistant professor of Civil Engineering at the University of Washington (Seattle).

Given sufficient axial loading the stiffness of a plane frame can essentially be reduced to zero causing buckling. This is reflected in the dynamic (free) response of the system. This work was conducted with former PhD student Ted Lyman.

This is an off-the-shelf teaching model (from Pasco) that can be made to exhibit various behaviors including chaos. Former PhD student Richard Wiebe used this simple system to test a new criterion for chaos (based on frequency content).

A pendulum bob is attached to a linear spring. When forced harmonically the pendulum can exhibit some interesting internal resonance phenomena. This work was conducted with former PhD student Phil Bayly, now the chair of Mechanical Engineering at Washington University in St. Louis.

The pivot of a double pendulum follows a parabolic arc. The pendulum responds accordingly, displaying a softening spring characteristic.

A thin steel panel is clamped along its edges. It is then heated so that it buckles. It is then subject to intense acoustic excitation and exhibits intemittent (chaotic) snap-through. This work was conducted at NASA Langley in conjunction with Steve Rizzi and former PhD student Kevin Murphy, who is now the chair of Mechanical Engineering at the University of Louisville.

A peanut-shaped groove was machined into two plates of lexan and then a ball bearing was placed within the resulting canal. The balls motion was tracked by a video camera as the system was shaken from side to side and simultaneously tilted. This work was conducted with Duke math professor Tom Witelski and former PhD student Richard Wiebe. A brief video discussion can be found here.

Axially loaded members can be configured to provide the adjustable springs elements in vibration isolation systems. Again, polycarbonate strips are a useful material with which to make structures with a controllable stiffness (based on geometry). This work was conducted with former PhD students Ben Davis and Sophia Santillan.

Airfoil with a loose flap

A slender structrure in a fluid flow (like a wing) is often liable to flutter. These videos show a three-degree-of-freedom typical section (NACA 0012) airfoil. It is linear other than a freeplay in the flap. Under certain flow conditions limit cycle oscillations (LCO) develop and they can even co-exist, so that it is possible to perturb from one steady-state to another. More details of this work can be found in the research section of this website. This work was done with Earl Dowell and former PhD students Mark Conner and Steve Trickey.

The original idea behind this work was to look at a buoyant cylinder suspended from the sea-floor as a way of mitigating storm damage. Instead we used the effect of gravity on a mass suspended on cables and observed the subsequent behavior. There is a severe effect whenever the cable becomes taut. A related system is shown in the video. Here a small ball roll is constrained within a eye-shaped container. The motion is either periodic or chaotic when shaken, and the rebound is akin to a cable suddenly becoming taut.

A planar rectangular rigid body may overturn if shaken hard enough. These videos show a variety of overturning behavior, and sometimes the boundary (in parameter space) between overturning and not overturning is fractal. A number of students worked on these projects including former MS student Todd Fielder and former PhD student Jonathon Nichols.

This is an archetypal non-smooth dynamical system. A simple pendulum experiences a sudden impact when it comes into contact with a rigid barrier. It is capable of exhibiting a variety of interesting behavior including grazing bifurcations, co-existing attractors and super-persistent chaotic transients. The early work was conducted with former PhD students Phil Bayly, and then Christopher George revisited this system more recently.

This system consists of a large impacting pendlum that also has a smaller pendulum attached to it, and that impacts against the larger pendulum. This work was done in conjunction with former PhD student Christopher George and Tom Witelski.

The Duffing track/roller coaster described earlier was adapted to a non-smooth system. A rebound barrier was placed (at various locations) on the track, so that the cart would experience a sudden impact condition. This work was conducted with former PhD student Mike Todd.

The preceding non-smooth systems could be considered passive. That is, the impact condition was modeled using a simple coefficient of restitution and energy was generally dissipated at impact. In this system the mass experiences a sudden kick - a sudden gain in energy. This was inspired by an old-fashioned pinball machine. This work was conducted with former PhD student Christopher George and former MS student Ashwath Kini.

A simple pendulum is struck by a rotating tab. This kind of non-smooth forcing leads to some interesting behavior. The research was conducted with former PhD student Ben Davis.

A set of cantilevers are 3D-printed on a common base. They are grouped into 4 sets of 4 different lengths. When one is plucked then the others of the same length vibrate in resonant sympathy. It only takes a tiny amount of energy to be transmitted through the base for these lightly dampled systems.

A rigid link model was contrived to exhibit some interesting bifurcational behavior in a 3D configuration space. The behavior is well-represented by features of the underlying potential energy. This work was done in conjunction with Susan Guan, a former PhD student, now a post-doc at Texas Tech.

An Airfoil with loose flap